SHOULD THEY BE ALLOWED AT DOG-TRAINING CLUBS? By Laraine Malvern 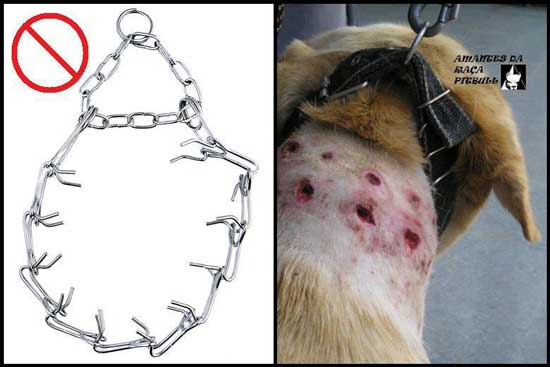 CHOKE/CHECK COLLARS -
SHOULD THEY BE ALLOWED AT DOG-TRAINING CLUBS?
By Laraine Malvern

How many of us "wrinklies" remember dog training in the 1960's? Barbara Woodhouse was the doyen of the then dog-training world. She always used a choke chain and even told you to suspend a dog from the choke-chain for 10 seconds if it was mis-behaving! When I first started at a dog training club choke chains were mandatory. We walked round and round the trainer in a circle. If your dog pulled you kept jerking the chain to get it back to heel. The more your dog pulled the more you were told to keep jerking the collar. At best dogs developed a bald patch where their hair kept getting caught in the collar. At worst dogs were going round in circles with bulging eyes and blue tongues! For many of these dogs, and their owners, training classes were an extremely stressful experience. If you think about it, jerking the collar caused pain, and the dog's natural instinct would be to get away from that pain, so for many dogs a choke collar had the opposite effect to that intended - it exacerbated the problem and made the dog pull more.

I have searched the web to try to find any scientific studies which point to harm being done by choke collars. In 1992 a study in Sweden by several chiropractors took place. This involved studying 400 dogs. The dog-owners were offered a free chiropractic examination. Back anomalies were found in 63% of the sample. Of the dogs with cervical (neck) anomalies 91% had been exposed to a long history of pulling and straining on the lead. The most severe anomalies were found in dogs which had been wearing choke chains. The conclusion was that the action of the choke chain resulted in pressure being distributed around the dog's neck, but the muscles which absorb this pressure are only found at the sides of the neck, the throat, larynx and oesophagus are almost unprotected, thus choke chains can be dangerous.

In 1998 one police sergeant and two constables were convicted of a number of offences under the Protection of Animals Act following a police dog dying after being suspended from a choke chain during training. At the time the RSPCA and the NCDL (now The Dogs Trust) stressed that these devices were harmful. Robin Walker of the British Small Animal Veterinary Association (BSAVA) when commenting on the case told the BBC that choke chains have often been misused and can cause dogs severe injuries. He said that vets had seen injuries such as severely sprained necks, dislocated neck-bones haemorrhages into the eyeballs crushed windpipes and paralysed larynxes. The BSVA cautioned that training aids which inflict some degree of physical pain on a pet should only be used as a last resort, and then only after consultation with a vet. The BSVA along with other welfare groups believed that positive reinforcement methods which reward dogs for good behaviour should always be used in the first instance as the preferred method of improving discipline. Following this the police reviewed their training methods and in July 2000, Chief Police Officers removed these collars from the approved list of equipment in police dog training.

www.petplanet.co.uk/news/news_archive/chokechain
http://news.bbc.co.uk/l/low/uk/209076.stm
Choke, prong and shock collars can cause disease and possibly lead to cancer

In May 2004 Austria was the first country to introduce a law banning the use of choke collars.

In the late 1970's and early 1980's some enlightened people began to question whether these training methods based on aversion to pain were effective. This led to the development of reward-based training. At around the same time new less-painful and harmful methods of restraining dogs were coming onto the market - the Halti, Gentle Leader and many designs of harness. In the 1990's the rules of good dog training were gradually being rewritten and accepted. Two of the pioneers of studying dog-training, motivation and behaviour were David Appleby and John Fisher. They were two of the founder members of the Association of Pet Behaviour Counsellors (APBC). John Fisher set up the Association of Pet Dog Trainers (APDT). By the early 90's many dog-training clubs were adopting these reward-based methods, and choke-chains were becoming a thing of the past. Members of the APDT are not allowed to use choke chains under any circumstances - see their leaflet on the subject.

Look at any modern book on dog ownership or any of the numerous web-sites and their advice when telling you how to choose a dog-trainer will always say to avoid those clubs which use choke collars.

The majority of dog training clubs who advertise on the web make a very prominent point at the beginning of their web pages of the fact that they do not use choke collars.

Leading Behaviourists/Trainers who will not use choke collars are:

David Appleby in his book Aint Misbehavin' writes that pain avoidance is a common cause of dogs pulling on the lead. (p 142) He says that this is specifically from pain inflicted on the dog's neck from a check chain. He goes on to explain the action of the check/choke chain. He says that this method of training can cause stress and if the method backfires some dogs learn that being on the lead is an unpleasant experience, increasing their tendency to pull to get away. He concludes by saying that the check chain can be an effective piece of equipment in experienced hands, but it is by no means the best, nor the most humane technique, particularly because of its potential to cause physical injury to the neck.

John Fisher "Why does my Dog" (1991) p. 102. writes:
"Throughout this book I refer to the use of the choke chain. I know they are now called check chains because that is what they are designed to do - check not choke. When they first came into this country from Germany at around the time of the First World War, they were called choke chains and a writer in one of the dog papers at the time called them cruel and barbaric. ……………………… Just when they started to be known as check chains I do not know, but although it sounds a kinder piece of equipment in the hands of a novice it still performs the same function - it chokes. ………………………My other objection is that I see far too many dogs that arrive at my premises dragging their owners behind them. These dogs invariably have bulging red eyes and blue tongues because their blood supply and air supply are being restricted through the tightness of the chain, yet they still pull. Quite often there is evidence of muscle and tissue damage to the dog's neck caused by the constant pressure of the chain. …………….My final objection is that I have not had cause to use one for many years thus proving that they are not necessary. The only reason they are used so much by pet-owners is that we have all come to accept the choke as the standard anti-pulling equipment without giving any real thought for alternatives." (This was written in 1990)

John Fisher "Dogwise" (1992) p12. writes:
"It is encouraging to see that more and more pet owners are rejecting the use of choke chains as a training aid and using more humane methods of control like head collars."

All the evidence is there both scientific and humane. Choke chains are not an effective training aid for the majority of dogs. To have any effect at all the timing of jerking on the chain must be so instant that the majority of us, even experienced dog-owners would not be able to use them properly.

So why are there still training clubs out there who continue to ask both experienced and new owners to use these devices? It may be that they have always trained this way, and are resistant to change - the "we have done it this way for over 40 years so it has got to be right" syndrome.

Some clubs just do not want to upset their established trainers. It is becoming increasingly difficult to get people to give up their free time to train dogs and owners, so the more enlightened club members grin and bare it because they are worried that they will not be able to get another trainer.

Some clubs may use reward-based training, but have never amended their rules, so that when someone insists on using a choke-chain there is little they can do about it.

Some clubs may leave it up to the individual to decide whether or not to use a choke chain, but if new dog-owners see people in the more advanced classes using a choke chain then they will think that this is what they are aiming for and go out and buy one.

Pet Supply Shops only stock chains because the demand is still there.
If we in dog-training clubs stop using these collars then this will be a step in the right direction to slow that demand down.

In my own club our head trainer was an APDT member, however other trainers were not APDT members. We did not have a rule banning choke-chains, but we always told people when they joined that we did not use choke chains. Things came to a head when one of the other trainers wanted to bring her dog to training classes and use a choke chain. What example would this have set to our members? It also put out Head Trainer in a difficult position - what would happen if the APDT did a spot check? It was time to look at up-dating our rules. One big worry was that we could well lose one of our established trainers by changing the rule, and like many clubs we do not have a big pool of trainers to call on.

Fortunately we had a healthy bank balance and we could afford to train more trainers. We were very pleasantly surprised when four members in our top class expressed an interest in becoming trainers. They have attended two courses at a local college and studied both Canine Behaviour and Dog Training Skills. They are now gaining experience by helping trainers in the other classes. Some are planning to carry on studying. All four will soon take their first class with an established trainer as an observer. In the meantime we had our AGM, and after giving members all the facts, had a unanimous vote to change our rules to ban the use of choke chains. The rule reads "we do not allow the use of choke chains, check chains, electric collars or pinch collars" - we thought that we would mention everything just in case some pedantic person wanted to use any other punishment type of collar. We did not lose any trainers or members as a result of the rule change. Looking back we can only ever remember one potential member not joining because he wanted to use a choke chain - a very macho man with a German Sheherd Dog!

If we can do this so can other clubs - look at your rules, is it time for a change?