Dogs have three instinctive behaviours which cannot be removed. Let us look at them in some depth to help us understand and work with these instincts rather than against them. We will then be able to chose suitable motivators for our dogs that can fulfill these instincts, channeling the dog's natural instinctive drives into a reward that only its handler can provide.

All dogs have their original instincts for survival, and the strongest of these is their instinct to hunt. One of the original reasons for taming wolves into domestic dogs was for guarding. This progressed on to running down and killing prey, and herding. All these were developed from their wolf instincts. Dogs work for us but still have these underlying instincts whatever their breed - it has been proved that all types of tame and wild dogs have the same DNA and none are closer than others to the wolf.

The first "dogs" had upright ears, long nose and short coats - similar to Huskies and German Shepherd Dogs. However, humans wanted more showy looks and began to specifically breed spotted coats, long ears, curly tails etc to change the appearance of the dogs that they were breeding. These breeds would have trouble surviving in the wild as their coats would be too thin, or they would not have the speed or stamina to hunt and kill for food etc.

Over the centuries Man has created different breeds of dog to fulfill different aspects of hunting - such as sight searching, scent searching, flushing, digging, treeing, setting, pointing, decoying and retrieving. Some breeds have become specialists in certain areas (an interesting example is the Portuguese Water Dog) while other breeds have been bred to become all-rounders. 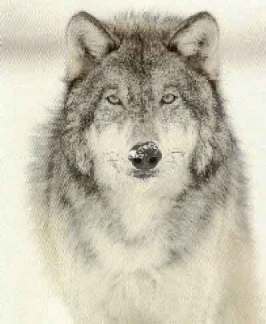 Remember, wolves hunt for food to survive. When they are young they stalk and pounce on small animals such as mice and insects. Yet as they mature they develop their skills and use different techniques depending on their circumstances. Hunting alone they can catch birds and medium sized prey like rabbits, while working as part of a pack they can hunt larger prey such as deer, elk and moose. Each pack member does a specific task to enable the pack to hunt and kill the prey. Dogs still have these instinctive behaviours and display at least one of them in how they play or in the way that they work.

This behaviour can also be seen when large dogs, which have not been socialized properly with different breeds of dogs, instinctively attack small dogs thinking they are prey such as rabbits or rats. For instance a farm collie that regards Shetland Sheepdogs as prey as they are small and hairy and run across a field where the scent of rabbits is very strong. This is not aggressive behavior as such - it stems from the dog's instinctive behaviour to hunt for food.

Do not grab your dog by the neck, this behaviour is used to kill prey. Wolves do not do it to each other. It stresses the dog and could provoke your dog into biting you as it becomes stressed and defensive.

"Large prey" - wolves and dogs hunt in a pack to bring down large prey. It involves total cooperation between all the pack members i.e. individuals willing to cooperate. THE BEST THING YOU CAN DO IS COOPERATE WITH YOUR DOG. Be part of a pack and reap the benefits that total cooperation brings.

"Grabbing & holding" - is part of the hunting instinct. If you pull a dog it will instinctively pull back (i.e. an automatic reaction/reflex). Therefore, don't pull something out of a dog's mouth, either distract it or prise the jaws apart by putting your fingers either side of its mouth. This also holds true should a dog grab you - don't pull your arms or legs away, stand still until they let go. Wolf cubs practice through play using speed and chase (hence dogs "pinching" children's heels etc). We can use this to encourage dogs to come to us, for retrieval and training purposes.

FOOD IS BEHIND ALL THIS HUNTING BEHAVIOUR
- FOOD IS ON THEIR MINDS ALL THE TIME.
Don't get angry - IT IS INSTINCTIVE THEY CANNOT HELP IT!

Smelling is another hunting behaviour. Dogs sniff the air and ground with noses far more sensitive than ours. We have no idea of the vast amount of information they receive as they use their noses - it is a whole new world. The sense of smell is very important to a dog and should not be fought but utilized for both our benefits. When a dog is using its nose it concentrates to such a degree it shuts down its other senses (as we do when we are concentrating on reading etc). Hence, a dog is not being disobedient when it does not hear your call as it investigates a smell - it is nature's way of focusing the mind while hunting.

This instinct is used a lot. A sharp woof is a warning, as is the lifting of the lip, growling and posture. Dogs instinctively guard things and territory - they think it is their job to do so and we must make them understand that as the pack leader it is our job instead. Early man channeled this guarding instinct to breed dogs to protect their livestock (ie the dogs associated their herd or flock of animals as their "pack" which needed protection from predators and strangers). Some dogs were bred to guard livestock or property, while others used their instincts to herd sheep, cattle, deer and even fish.

Humans have taken advantage of the strong defence instinct to breed certain types of dogs for fighting their own species (such as Staffordshire Bull Terriers). These dogs have been bred to look upon humans as their own species/pack while seeing any other dog as a potential threat to itself and its pack, and therefore they must be attacked.

Dogs have a right to defend themselves as we have when we instinctively scream and run away from a frightening situation. If our dogs have to do it it shows we have made a mistake for the situation to arise. The dog may be remembering a bad experience and lunge and/or bark at a person or dog. The distance between the dog and the threat is crucial. We must give dogs space when they need it. A dog may growl and lift its lip at another dog but it instinctively will try not to start a fight as it does not want to be hurt (as with wolves). By yelling and pulling on the lead, a dog associates the pain in its neck with the threat it perceives, hence putting the dog on its guard and making the situation worse. This is why LOOSE LEAD WORK IS SO IMPORTANT (see Turid Rugaas' book "What do I do when my Dog Pulls?").

Staring at a dog, waving arms, hands and legs are threatening signals to a dog. This is why it is very important not to leave children, who instinctively act in an erratic way, below the age of 14/15 years old alone with a dog.

It is not natural for a dog to be confined. Holding a dog tightly is alien to a dog - look at their calming signals as you hold them (turning their head away, licking their lips etc). Imprisoned dogs become instinctively defensive e.g. when tied up, in a cage/kennels etc. We must use calming signals to overcome their fear, such as turning our backs, or to the side, yawning, licking our lips etc.

This is very strong instinct - dogs need to be with someone. Wolves and dogs are used to being part of a big family, with lots of dogs, doing things together. This is why separation anxiety is so common among pet dogs. Being left alone is the worst thing that can happen to a dog, and it must be acclimatised to it slowly without stress, building up during the period that it is alone. A dog needs to know that you will return, so as not to become scared.

Leadership - a dog will only test your leadership in its adolescence, just turn away and ignore it. You don't have to be a bully to be a leader - be a parent instead.

DON'T GET ANGRY - it will frighten and confuse your dog but it won't respect you.

A pack is formed by a pair having puppies. These puppies instinctively worship and respect their parents. As the puppies grow they never loose this respect and in time their puppies give respect to them. Hence, all the members of the pack know their place within it and who is their leader. We must create the same environment. We do this by making it our job to want a dog to cooperate with us. Puppies are allowed liberties when they are small, such as eating first by their parent to enable them to grow healthily, and holding the top of an older dog's neck. As the pups grow older they are told off by the older pack members for taking these liberties (eg being flattened; their nose being pinned down by the older dog's mouth). In response, the adolescent will roll over to placate the situation and the incident is finished. However, it must be stressed that trying to imitate dog behaviour (such as flattening, nose being pinned down, etc) SHOULD NOT BE ATTEMPTED by humans. Dogs do not recognise us doing these canine actions as WE ARE A DIFFERENT SPECIES - they only recognise these actions if they are done by another dog.