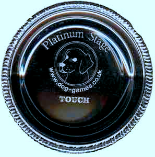 This webpage contains a description of the following -

The dog learns to run approximately 50ft (15m) up to a Target Box (a specially made but inexpensive fold-away ramp - similar to a flyball box but without the expensive trigger mechanism that is used to launch a ball) and touch it with at least one of its paws as it turns around to run back to its handler.

This Game can be taught in two ways - either by learning to touch a marker with its paw and then the marker is placed on the Target Box, or by attaching a simple "ball holder bar" to the front of the Target Box so that the dog can collect a ball as it turns on the box and bring it back to the handler. The Starters section will give fuller explanations about both these methods

As with the Dog-Games Hand or Round, Touch is an ideal way of teaching a dog to run quite some distance from its handler and perform a task (ie touch the Target Box) and then return to its handler for its reward

If using the "marker" method, the technique can be transferred on to other exercises (eg shutting a door, pressing the pedal of a bin, "shaking" hands, touching specific playing cards (ie scented cards) from a pack, pressing switches etc. This Game is also a great way of teaching your dog to run on ahead of you to touch a particular piece of equipment with it's paw, and can easily be adapted for use on Agility contact equipment.

As well as being a fun Game for all types and sizes of dogs to do using very little equipment, it also has an added benefit for those dogs that may progress later on to do flyball. The target box design and materials are very similar to a British Flyball Association flyball box - the difference being that the front ramp of a BFA box moves as the dog presses it, triggering the tennis ball that is set in the hole(s) within the ramp - another difference is the price! Because the flyball box ramp moves when pressed, a learner dog can easily be put off by its movement and sound and be wary of putting all its weight on it as it does a swimmers turn (see Round) to return down the lane. However, if dogs are taught to press a target box (which is far less daunting for the dog) it is easy to transfer them over to a standard BFA box later on, particularly by reintroducing the marker which it learnt to touch right at the beginning of its Touch training.

At the Silver level of any Game, plastic netting should be used between lanes in the interests of the safety for each dog.